Now that the gay marriage issue has been effectively settled, whether transgender people should be able to choose the bathroom and locker room of choice is the debate du jour. This issue took center stage when North Carolina passed a law stating a person must use the bathroom that corresponds to the birth gender.  This law was passed to override a new Charlotte law that said anybody could  choose a bathroom based on their sexual identity.  While this is not the most important issue of our time,  for some people this will significantly affect their lives, so it should not be dismissed as silly or irrelevant. 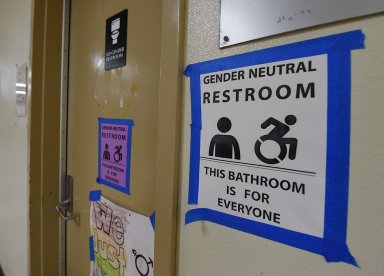 For the purposes of this discussion, I will focus more on the locker room situation than the bathroom situation.  While the same issues all apply for bathrooms, the effect of being in a closed stall in a common room is far less than the effect of sharing a shower with someone of the opposite gender.

What is the right and wrong of requiring that people be required to use the bathroom of their physical gender?  Some people firmly believe that transsexuals are sick and evil.  Others believe that those who oppose mix-gender locker rooms are homophobic and evil.  I reject both of these views.  I think of this as a case of competing rights:

Additionally, not all people who wish to use the locker room of the gender not assigned at birth are not the same.  Note that by definition a trans woman  is someone who is born as a man and identifies as a woman.  A trans man is someone who is born as a woman and identifies as a man.  We can divide these people into four groups:

I would think that a reasonable person would say that group 1 should be able to use the locker-room of their current physical gender, that group 4 should not be allowed to use the other gender’s bathroom, and that with groups 2 and 3 we should try to reach a reasonable compromise.  I think it is also fair to say that each case is different.  The transgender person is different and the available accommodations are different.  When we try to impose a draconian solution in either direction, we lose the ability to reasonable.   The Charlotte law was extreme in one direction and the North Carolina law was extreme in the other direction. Think of the zero tolerance policies in sexual harassment that result in a kindergarten boy being arrested for kissing a kindergarten girl.

I personally am not worried about true transgender people using a bathroom, but I think that the concern that it will be abused by straight people is quite real.  I have seen this concern dismissed in the media by two arguments:

If we accept the proposition that both sides in this argument have reasonable concerns, then, how do we come up with a reasonable solution?

For example, here are  a few possible accommodations for a trans-woman who has an official diagnosis and would need to take a shower after physical education class.

The key factor is to allow this flexibility.   In May 2016 the Obama administration issued a directive that require school districts to allow transgender students to use the bathroom of their choice based upon the request of the parent or legal guardian (New York Times).  There are three problems with this directive:

When we have right versus wrong, we don’t want to compromise.  We shouldn’t compromise with Nazis or terrorists.  When we have competing rights  then we should be able to compromise to find a solution that tries to respect the rights of all.  Let’s compromise and work this out.