“New computer modeling suggests the Arctic Ocean may be nearly ice-free in the summertime as early as 2014″.

– Al Gore at the Climate Change Conference in Copenhagen in 2009“

“What we are seeing around the world is what scientists have predicted.  They’re not telling us that we may see global climate change. We are seeing it, and we’re seeing the impacts now.”

In the first part of this series, I delineated six statements which must all be true for the United States to justify taking severe action to combat global warming:

Today we will look at the first statement:  Global temperatures are rising.

In 2003 the Union of Concerned Scientists put out the following temperature projections graph: 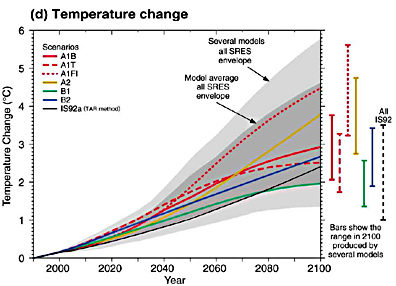 This graph shows slowly rising temperatures in the early 2000’s which will then accelerate in the mid part of the decade.

Here is a graph from NASA showing global temperature changes since 1880:

This graph from NASA shows data since 1996.

These graphs shows that global temperatures rose steadily from approximately 1960 till shortly before 2000.  Since then, global temperatures have been flat.  ABC News reported in September 2013, “The average global temperature hasn’t risen in 15 years, a deviation from climatologists computer-simulated predictions.”   Global warming theory backers state that fifteen years isn’t long enough to judge the trend, that it needs to be at least thirty years.  Scientists also theorize that the oceans are absorbing more heat which is causing the land-based temperature readings to not reflect the full story.  This may or may not be true.  It is just a theory.  The big point is that this was reflected in the predictions.   ABC went on to say:

The researchers’ problem: Their climate models should have been able to predict the sudden flattening in the temperature curve. Offering explanations after the fact for why temperatures haven’t increased in so long only serves to raise doubts as to how reliable the forecasts really are.

The key point here isn’t to argue whether or not the last fifteen years of flat temperature disproves the global warming hypothesis or can be accommodated by this hypothesis.  I certainly don’t have the expertise to pass any judgment here.  What I can say is that the predictions were wrong and we are being told we must take significant action based upon predictions .When Gore made his ice-free Arctic prediction as early as 2014, he did use the word “may” and did not definitively predict this lack of ice would be complete by 2014, if there was any validity to his claim, then there should have been some significant progress toward arctic balminess by now.  There has been none.

When Einstein proposed his theory of relativity, he said that if his theory was correct, then certain predictions that could be observed only during an eclipse would prove valid.  If the observations did not match his predictions, then his theory was invalid.  Years later researchers mounted an expedition to Antarctica to observe an eclipse there.  The observations matched Einstein’s predictions.   When global warming predictions don’t match the observed facts, why do so many scientists choose to ignore or excuse this?

I don’t think we really have any idea.

Global Warming: A Step by Step Look At the Key Arguments – Part 2: Are global temperatures rising?

Global Warming: A Step by Step Look At the Key Arguments – Part 3: Do carbon emissions from humans cause global temperatures to rise?

Global Warming: A Step by Step Look At the Key Arguments – Part 4: Will global warming will cause catastrophic environmental consequences?

Global Warming: A Step by Step Look At the Key Arguments – Part 5: Is it the proper role of the United States government to enact regulations on private companies and individuals to protect the environment?

Global Warming: A Step by Step Look At the Key Arguments – Part 6: Can the actions of the United States government effectively prevent these consequences?

Global Warming: A Step by Step Look At the Key Arguments – Part 7: Is the evidence supporting global warming so overwhelming that we should no longer debate or delay?

First, all major economies must put forward decisive national actions that will reduce their emissions, and begin to turn the corner on climate change. I’m pleased that many of us have already done so, and I’m confident that America will fulfill the commitments that we have made: cutting our emissions in the range of 17 percent by 2020, and by more than 80 percent by 2050 in line with final legislation.

Barack Obama, understanding the histrionics required in climate-change debates, promises that U.S. emissions in 2050 will be 83 percent below 2005 levels. If so, 2050 emissions will equal those in 1910, when there were 92 million Americans. But there will be 420 million Americans in 2050, so Obama’s promise means that per capita emissions then will be about what they were in 1875. That. Will. Not. Happen.

At the Climage Change Conference in Copenhagen in 2009, Barack Obama pledged the United States to drastically reduce carbon emissions.  Obama is the most prominent of those who say that unless we take drastic action, we will suffer devastating climactic changes including rising seas and dramatically increased hurricanes, tornadoes and other natural disasters.  While it is theoretically possible that we could make these reductions solely based upon improvements in renewable energy technologies such as solar and wind, at the current time there is no reason to believe that these technologies will progress anywhere close to the point that these advances alone will allow us to make these reductions.  This would then require Americans to dramatically reduce energy use which would severely curtail both the economy and our lifestyles.

If the climactic devastation consequences are real, then we all need to make these sacrifices, but I agree with Carl Sagan’s statement that extraordinary claims require extraordinary evidence.  Barack Obama and others claim that the debate is over, that we have all the evidence we need.  Are they right?   Is the debate truly over?

The argument by those convinced that global warming will lead to climactic devastation can be broken down into the following statements:

For us to take the proposed drastic actions to reduce our carbon emissions, every one of these statements needs to be true.  In this series, I will look at each of these statements in turn.  I will say now that I agree with at least one of them.  I hope that breaking down the global warming issue in this manner will help clarify the issue.

Global Warming: A Step by Step Look At the Key Arguments – Part 2: Are global temperatures rising?

Global Warming: A Step by Step Look At the Key Arguments – Part 3: Do carbon emissions from humans cause global temperatures to rise?

Global Warming: A Step by Step Look At the Key Arguments – Part 4: Will global warming will cause catastrophic environmental consequences?

Global Warming: A Step by Step Look At the Key Arguments – Part 5: Is it the proper role of the United States government to enact regulations on private companies and individuals to protect the environment?

Global Warming: A Step by Step Look At the Key Arguments – Part 6: Can the actions of the United States government effectively prevent these consequences?

Global Warming: A Step by Step Look At the Key Arguments – Part 7: Is the evidence supporting global warming so overwhelming that we should no longer debate or delay?

This is the final part in a series on basic economics inspired by the works of Thomas Sowell.

The prior segment in this series clearly shows that a capitalistic, free economy greatly outproduces a centralized, less free economy.  Why then do so many prefer socialism?

Many people actually believe that socialism produces better economic results than capitalism.  I believe I have shown that this is totally mistaken and that the evidence overwhelmingly shows that capitalism outproduces socialism.  I would welcome anybody who can refute my previous arguments here to respond.

Even those who agree that more capitalism leads to greater overall wealth still favor government control of economies to a varying degree, from heavy government regulation to socialism to communism.  These are reasons they give:

I believe that some of these statement contain some truth while others I vehemently disagree with.  I will return to discuss each of these topics in future segments.

According to the Heritage Foundation’s 2014 Index of Economic Freedom, Chile is ranked one of the most free countries in the world, and is the most free in Latin America with a per capita income of $18,419 .  Honduras in contrast is one of the least free with a per capita income of $4,610.  The bottom 20% in Chile has an average income roughly twice the average income in Honduras.  Despite this, in happiness surveys, Honduras rates as a much happier country than Chile.

If you are poor and everyone else around you is poor, you  tend to be happier than someone who is much better off but who is surrounded by even wealthier neighbors.

In remarks before the World Affairs Coucil of Greater Dallas in 2003 Alan Greenspan talked about “the creative destruction” of capitalism where the standard of living rises as new technologies and methods replace old.   This leads to both progress and stress.  He stated, “I do not doubt that the vast majority of us would prefer to work in a less stressful, less competitive environment”.

Basically, under capitalism there are winners and losers.  This is an essential element of capitalism.  Socialism tries to have no losers.  It is much more stressful to have to compete first to survive and then to better yourself.  There is an attraction to having everything handed to you, even if you don’t get as much.

Picture a classroom with no grades.  Nobody passes or fails.  If you show up, you get promoted.  There are no tests.  In this environment there are some who would likely be at the top of the class who would hate this.  The majority would probably prefer this stress-free environment.  Overall happiness would be higher than in a classroom where students compete for grades.  Does anybody think though that the students would learn more in a class without grades?

If you found these segments interesting, I recommend that you read “Basic Economics” by Thomas Sowell.   You will find some of what I said embodied in his work while some are my own extensions based upon the Sowell’s concepts.

This is the sixth in a series inspired by Basic Economics by Thomas Sowell.

Previously I had argued that wealth is created whenever there is a voluntary transaction as each side believes they are better off due to the transaction.  In my last segment I poked holes in my own argument by showing that just because a person believes he is better off, it doesn’t mean he is actually better off.

You could design this as a scientific experiment where you randomly divide people into two groups and have one group follow a capitalistic model and one group follow a command model.  While this is the most scientific method, it would be very difficult if not impossible to simulate all of the complications or real life.

Alternatively, you could take a country and split it down the middle.  This way you start with a common culture and similar natural resources.  The key differentiating factor would be the economic system. 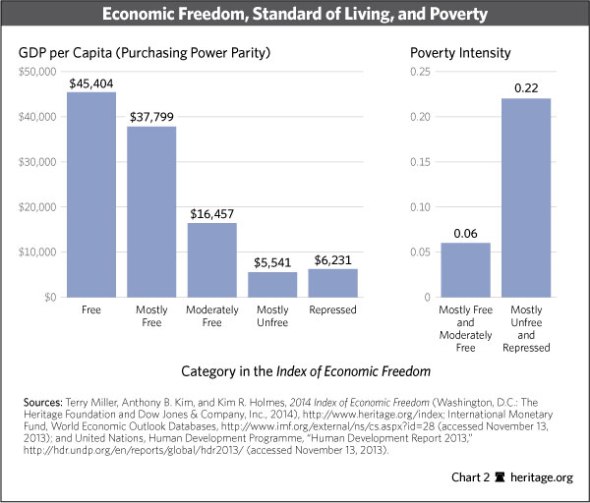 Changes within a country can make a dramatic difference.  Following the fall of the Berlin Wall, both China and India have moved away from a command economy to a more capitalistic economy.   As a result, nearly one billion people have been lifted out of extreme poverty.

Capitalism clearly outperforms socialism.  It isn’t even close.  Despite this obvious fact, socialism is still very popular in the world today.  Why is this?  This will be the focus of the next and (I think) final installment in this series.