Even before the terrorist strikes in Paris, we had a simmering debate on whether the United States should accept refugees from Syria.  On one side, we are naturally a compassionate people and instinctively wish to help people who are suffering.  On the other side, there was a strong likelihood that terrorists might be embedded among these refugees. 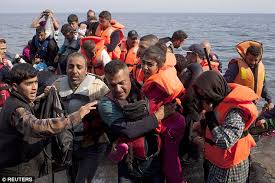 Accepting refugees could be inviting in terrorists.  The fact that at least one terrorist was a recent Syrian refugee, combined with ISIS’s boasts that they are sending terrorists as refugees, has intensified the debate.

A central premise of this blog site is that our underlying assumptions determine how we approach issues.  We can’t have any meaningful debate until we recognize these assumptions.  I highlighted particularly troublesome bad assumptions in a series on this blog on the top ten bad assumptions.  In this case, we have Bad Assumption 3 – America should not favor Americans.  I recommend reading or reviewing this post before proceeding.

The central assumption of those opposing settling Syrian refugees is that America needs to take care of Americans first.  If this is your assumption, it is crazy to risk the lives of Americans by admitting a refugee pool that very likely includes terrorists.  The key issue is security.

The central assumption of those supporting settling Syrian refugees in America is that we should not favor Americans over non-Americans.   The vast majority of the refugees are suffering people and we are heartless if we don’t help them.  The key issue is compassion.

My viewpoint is that America needs to look out for Americans first.  I outlined the reasons for this in the above-referenced blog entry.  Security must come first.  It may be impossible to prevent every terrorist attack, but we don’t need to go out of our way to make it easy for the terrorists.  The large majority of refugees are young, fighting age men.  Admitting these Muslim men from areas controlled by ISIS is laying out the red carpet for terrorists.

This doesn’t mean we should do nothing to help.  We can assist in humanitarian efforts and help them get resettled elsewhere, preferably in Muslim countries.  We could consider admitting some families with children, but that is still problematic.  That would be much safer than admitting single men, but it is still possible for ISIS to throw along a woman and some children to help the cause.

We could also consider admitting Christians, who are being persecuted and beheaded.  Obama also says it is shameful to have a religious test, but this is nothing new.  Our refugee laws are designed to help those who are persecuted.  These laws specifically mention religious persecution.  Saying that we shouldn’t consider religion is like saying if we did want to help Nazi victims that we couldn’t give any preference to Jewish over Christian Germans.

Proponents of bringing in the refugees also say that historically we have been compassionate with victims of persecution; however, refugees such as the Vietnamese boat people or the Bosnian victims of genocide did not threaten the safety of the American people.   Historically, we have always looked at safety first.  An immigrant suffering from tuberculosis would never get past Ellis Island.

President Obama mocks people who have security concerns when he says that opponents of admitting Syrian refugees are afraid of widows and orphans.  This shows a total lack of ability to understand the concerns of what appears to be a majority of the American people.  Possibly one compromise solution could be admitting widows and orphans but nobody else.

Once again, differing base assumptions underlies a key policy debate and prevents many on each side from seeing the viewpoint of the other.  My fundamental assumption is that it is the first duty of the American government to protect the safety of Americans.  If you do not agree, what is your assumption?  Think about it.